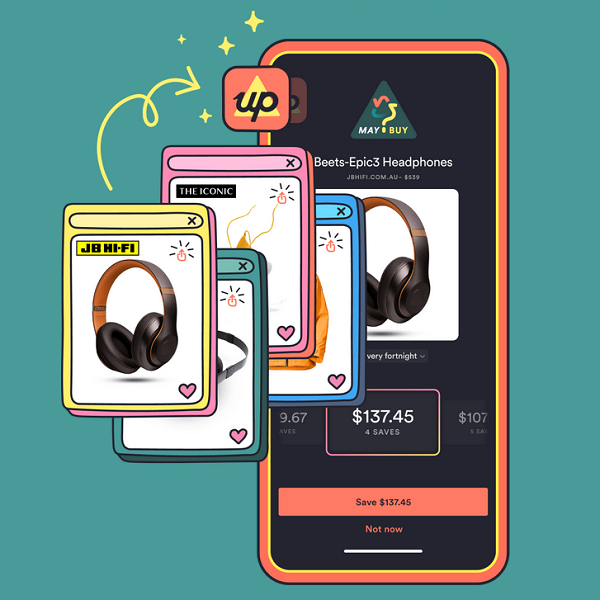 Research released by digital bank Up has found a quarter of Australians under 35 say Buy Now Pay Later has encouraged them to make purchases they regret, with the services evoking feelings of stress (2%) and apprehension (30%).

More than half (57%) of young Aussies say they would be interested in a savings-based alternative to BNPL, and now Up is launching just that. Introducing Maybuy – a feature encouraging customers to celebrate the joy of their purchases safely, protecting from overextension, late fees and buyer’s remorse.

The latest offering to the country’s highest-rated banking app means Up customers (known as Upsiders) can now create an automated savings plan for individual items they’ve found shopping online – dubbed a ‘Maybuy’. Once their goal is reached, they’ll be given the opportunity to purchase the item, or reconsider and keep the money they’ve put aside for something else.

At a time when approximately two in five (39%) young Australians admit they’ve had multiple BNPL purchases active at once, and one in four (26%) concede they’ve used the services despite feeling worried they may not be able to afford the repayments, the introduction of Maybuy is a timely reprieve that’s set to provide an ethical solution to support healthy and considered saving habits.

Up’s Head of Product, Anson Parker, says the temptation of BNPL services is real – and while they may have their place when well-managed, this new research by Up reveals a strong appetite for a savings-based alternative.

“Maybuy is a fun and easy way to buy things you actually love with money you actually have. That means there’s no regrets and no debt.”

“Our research uncovered almost a third (30%) of young Australians found their purchases less enjoyable when paid over multiple installments. So, we want to give people more time to make decisions about what they buy, which in turn we hope will lead to increased purchase satisfaction and better financial outcomes,” Parker says.

“It also found over half (53%) of BNPL users want to save money, but don’t know where to start. Maybuy offers a tangible solution and a savings launch pad to make saving feel a whole lot easier.”

To celebrate the launch of Maybuy, Up is hosting a limited-time pop-up store in Melbourne – The Maybuy Exchange – giving Aussies the opportunity to claim dollars back into their accounts in exchange for purchases they regret.

The experiential store is located in the heart of the CBD and will feature an ‘Anti-Impulse Machine’ where guests can physically swap previous impulse buys for the chance to get back anywhere from $10 to $500 (T&Cs apply). Encouraging people to think twice before making purchases they regret or can’t afford, The Maybuy Exchange will donate all impulse buys to a charity partner.

Joining Aussies on their savings journey is indie-pop duo Client Liaison, who confess they’re partial to an impulse buy or two.

“We’re no strangers to shopping online and the rush of buying things. But it’s often left us with ‘stuff’ we don’t really need or even want,” says Monte Morgan and Harvey Miller.

“As Upsiders ourselves, we’re stoked there’s now an alternative to Buy Now Pay Later. Whether it’s seeking out a new pottery wheel or even a new scooter, the time to ponder our purchase means we won’t lose sight of the things we’re completely in love with.”

Up is calling on Melbournians to bring these items to The Maybuy Exchange from Wednesday, 3 August until Sunday, 7 August. Located on the corner of Swanston Street and Little Bourke Street, the pop-up will be active from 11am-4pm across the five-day period.