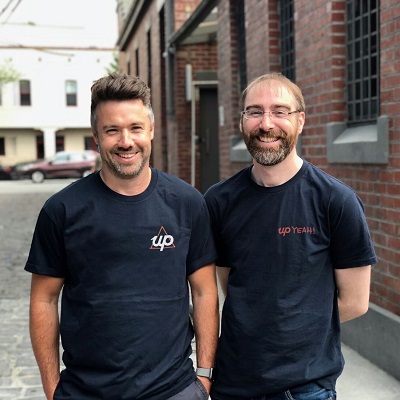 October 9th 2018 will go down in history as the day Australian Banking stepped into the future, with the official launch of Australia’s first Next Gen banking app.

UP is a partnership between Australia’s 5th largest bank, Bendigo and Adelaide Bank, and Ferocia, the software team behind Bendigo’s award winning banking platform.

Tier One People Founder, Dexter Cousins was one of a lucky few guests at the launch event in Sydney. The launch itself was more akin to an iPhone launch than the launch of a bank. Founder Dom Pym (the dude in the beard) wowed the crowd with an amazing product demo. Guests watched on as Dom transferred money from his UP account into the account of Head of Product, Anson Parker (pictured next to Dom,) using a voice command, in seconds.

A bank built by Techies NOT Bankers

Users can sign ‘UP’ for an account in two minutes (the average sign up time is 2 minutes 5 seconds to be exact!) and use the account immediately through Apple Pay while your card is issued. UP is the first cloud-hosted bank platform using Google Cloud Services, testing results on the platform are incredible. During 11 months of testing, the platform has spent a total of just over two hours in down time!

The technology is super powerful with features like spend tracking, spend analysis, automatic transaction recognition, instant payments using Osko and Siri integration. And they have been super smart to preempt open data reforms by giving users total access to their data. The tech is backed up by seriously slick UX and design.

I asked founder Dom Pym if UP were classing themselves as a challenger bank to the Big 4 Australian domestic banks. This is what he had to say;

“Bendigo and Adelaide Bank’s strong track-record provides us with a credible banking partner, coupled with the creative licence to design Up in the most ‘non-bank’ way possible. It has meant we can offer customers a new way to manage their money ahead of everyone else.”

“The alternative would have been to apply for a restricted banking license and be in the same boat as the neo banks – unable to launch in any meaningful way until at least 2019.”

“We’ll keep working at a fierce pace to add new and exciting features at a consistent rate. We’ve been averaging about five deployments per day, which is unusual for a bank, to say the least, and we’ll continue to do so.”