How banks are running the economy 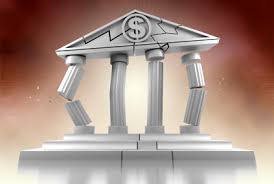 How banks are running the economy

Two quite innocuous things happened on Tuesday: the federal budget and an RBA rate cut.

Neither of these events will do much good, but nor will they do much harm, which is about as much can be hoped from both politics and monetary policy these days. Even RBA Governor Glenn Stevens has been constantly talking about impotence of monetary policy, so it’s likely to be true.

Why won’t the budget or the rate cut have much impact? Because the RBA and the government don’t run the economy — the banks do, and there is something much more significant going on in banking land.

There is always a non-bank lending industry; sometimes it’s bigger and more heated than others — for example the building society boom of the late 80s and US subprime boom between 2003 and 2007. And as a property developer said to me over several glasses of wine the other night, someone always does something stupid and brings the whole party crashing down. You can count on it.

I lent some money this week to a small NSW service station business at an interest rate of 14 per cent. I’m not sure whether to be happy about this, or worried.

It was through one of the new, rapidly growing peer-to-peer lending platforms — this one is called ThinCats (in which I’m also a small investor). The business needs $300,000 for three years to buy another servo in Port Kembla and is happy to pay 14 per cent because they were knocked back by the bank and the return on that capital will be double that because it’s a good location.

So about 40 investors have offered to lend the business between $1000 and $10,000 each. We got the full financials on the business plus a Veda credit report; security is a guarantee from the business owner and a registered charge over all the assets of the business, and ThinCats’ credit team spent about a month talking to the business owners and going through the books.

So why did the bank knock them back? Because they couldn’t, or wouldn’t, put up a house as security.And why are 40 investors — mostly self-funded retirees — happy to lend them the money without a real estate mortgage as security?

Well, that’s more obvious: because the bank term deposit rate for three years is 2.7 per cent, and about to come down some more.

That’s a yield discount of 11.3 per cent for the safety of a bank, which admittedly includes a government guarantee. But 2.7 per cent versus 14 per cent? It’s a no-brainer.

A couple of other examples of what’s actually going on at the moment: I’ve been talking on and off for a while to a bloke in Townsville named Jamie McGeachie, who owns a lending business called Finance One. He raises money in a separate business called Investors Central by issuing fixed-term preference shares and lends it to people through Finance One to buy a car — after they’ve been knocked back by the bank.

As fast as McGeachie raises money he lends it out, because there is a huge and growing army of ordinary people with good credit histories and solid jobs who need a car, but can’t get a loan from a bank and are prepared to pay more than 20 per cent interest for a few years to get one.

Why won’t the banks lend them the money, even at those sort of interest rates? Because they can’t offer a house as security and they fail on the algorithmic credit scores. McGeachie’s default rate is 2 per cent.

Source: How banks are running the economy – The Australian

Fintech a $US1 trillion fight