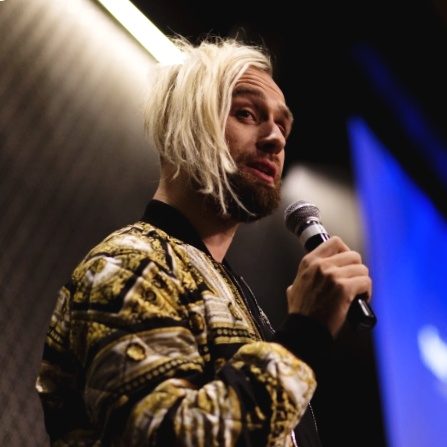 He became one of the country’s youngest self-made millionaires at the age of 26 — and now he’s revealed his next “multibillion-dollar” idea.

The co-founder of one of Australia’s biggest tech success stories has revealed his next “multibillion-dollar” idea — to create the “first crypto bank of Australia”.

Fred Schebesta, who became one of country’s youngest self-made millionaires at the age of 26 with the sale of his first business before founding comparison website finder.com.au, describes himself as a “time traveller” who looks into the future in order to make it a reality.

His bet on the online comparison space paid off. From a simple credit card blog called Creditcardfinder.com.au, Finder today is worth in the area of $1 billion and operates in 10 countries, with 10 more planned this year.

Now Mr Schebesta has found his new passion. He’s obsessed with cryptocurrency and blockchain — he hosts a daily crypto talk show from Finder’s York Street offices in the Sydney CBD — and is undeterred by the apparent drop-off in interest since the market’s peak in December.

Finder launched its cryptocurrency comparison offering in September last year and quickly saw massive interest, with traffic growth pacing at about 10 times that of other topics like insurance, telcos and credit cards.

In February, he and co-founder Frank Restuccia launched an over-the-counter (OTC) crypto exchange called HiveEx — which is now processing “millions” of dollars in large transactions every week — followed by crypto bill-paying service HiveSpend.

Mr Schebesta said the interest now was actually “so much higher” than during bitcoin’s manic rise in 2017, which pushed the digital currency from under $US1000 to touch $US20,000, and the entire cryptocurrency market over $US800 billion.